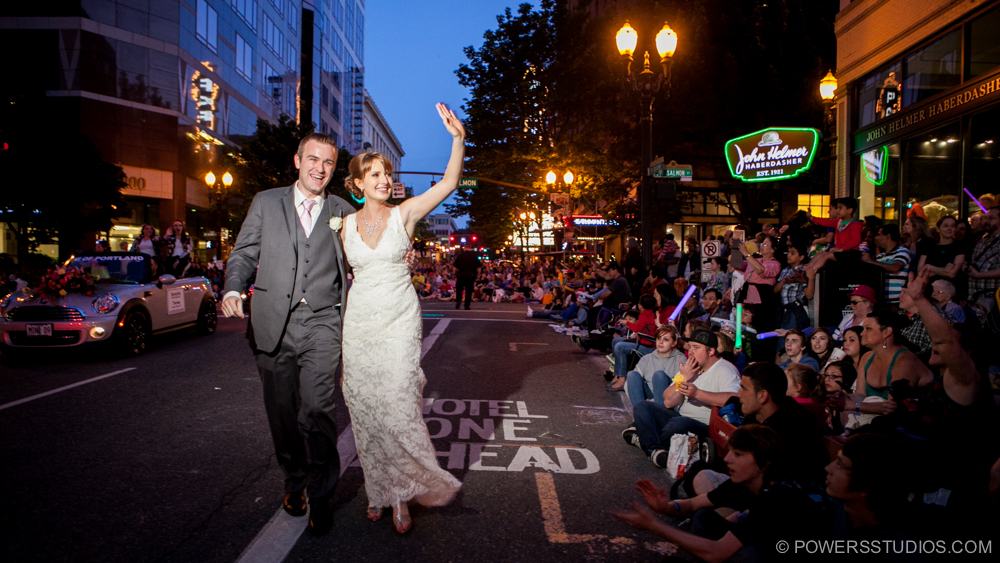 Wowzers. I know that’s a pretty strong word to start off a blog post but what the heck….all conservatism and civilized language go out the window with this wedding. Right off the bat, we have a leader in the club house for the Guapo…my annual award for the Guapo-est wedding of the year. This day was such, such a blast I don’t know if I can surpass it’s Guapo-ness. The whole day started at the beautiful First Baptist in NW Portland. The brick work, the stained glass…..fiddle sticks, it’s awesome. Did I fail to mention that the Starlight Parade was going on as well. Keep that in your back pocket because we’ll get back to that in a bit. After the heartfelt first look, we walked around and did some gosh darn epic photos of the bridal crew. It came out later in the day that Scott’s nickname in High School was Scotty Peaches. I feel that I need to comment on this. If he was any more positive or nicer..I think he’d be a nun. Not the ones with rulers and long pointy fingers, he’d be the nice, bake you cookies and sing “You are my sunshine” while you consume them type of nun. Needless to say, Scott and Courtney are the perfect pair. The wonderful ceremony is over and what appears at the front steps of the church? Portland Pedicabs ready to whisk us away on their heavenly chariots of double rainbows. Would I be a cotton headed ninny muggins if I told you the photos were not awesome, yes….yes I would. Next stop…Adrianna Hill Ballroom where the night was ready to unfold like a fortune cookie filled with bacon. Anthony from Sound Choice was ready to spin, the crowd was ready to dance and I was ready to stuff my face with ice cream sandwiches. Remember the aforementioned Starlight Parade. Someone had the great idea to have Portland Pedicabs come back later in the evening to bask in the glory of Portlandia and transport us around. We ended up in the Starlight Parade and Scott and Courtney shined like the burning super novas that they were. I could go on and on…but I won’t. Dagnabbit….this was a great wedding and if this the jump off point for these two, their future is bright. To end…I will quote a very loquacious figure, “Fourscore and…seven minutes ago… we, your forefathers, were brought forth upon a most excellent adventure conceived by our new friends, Bill… and Ted. These two great gentlemen are dedicated to proposition which was true in my time, just as it’s true today. Be excellent to each other….and Party On Dudes!”

“We thoroughly enjoyed our experience and highly recommend Powers. We appreciated the quick responses we received and exceptional customer service. We also had a great time with our photographer!

He was awesome. He took charge and was up for having fun. We weren’t completely sure what sort of photos we wanted to take, but hewas creative and thought outside of the box. We were really impressed that he remembered our families names on the day of the wedding.
Our wedding was the night of the Starlight Parade and he arranged to have Portland Pedicabs come back later in the evening to take photos in and around the parade.”