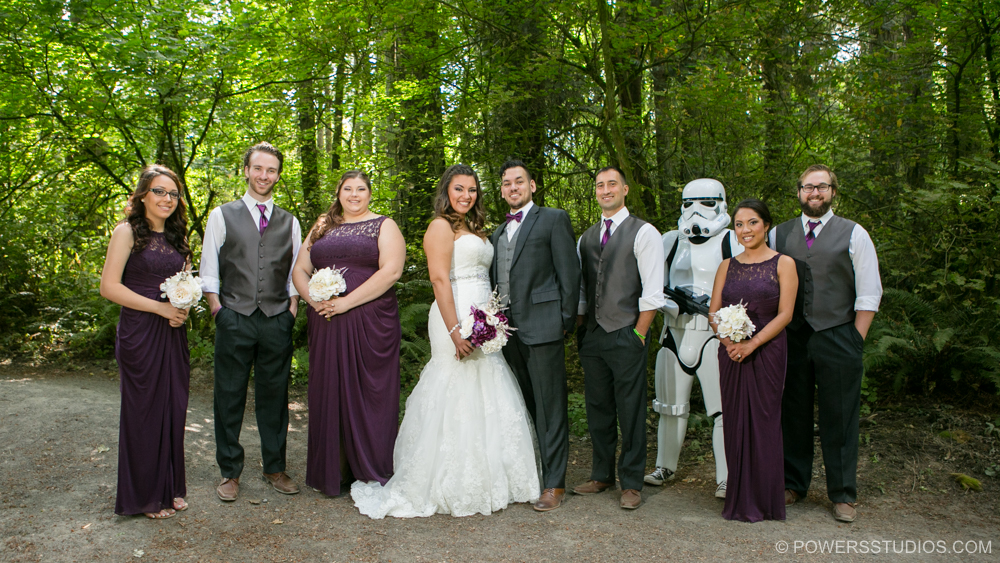 Star Wars…you’ve heard of it right? It’s a movie series if you didn’t know, and a cartoon series, and a novel series. It’s big. But….let’s not get into that too much. I mean we all know the influence that the movie and following entities have had on our culture. There are many theories out there about the movie, the story line….the characters, conspiracy theories. It’s depth is pretty extensive. When the newest movie came out..I geeked out a little…..and by little I meant a lot…A…LOT. I have my own theories…I actually had a class in college that delved into the movies and the explanation there was that it was a spaghetti western taking place in space. That may be true to some…on the surface but with this new offering I really tried to think of the series as a whole. In the mist of all this “thinking” there’s Breanna and Thomas’ wedding. On the surface…they love Star Wars and made it a major part of one the most important days of their lives. I mean…they had a Storm Trooper at their wedding, how cool is that? Yet when I dig a little deeper I see a different story. I mean….yes, there’s cool space ships, cool fight scenes and a plethora special effects. The story I see is actually a family drama. It is about relationships…the family of the Skywalkers and the wake of their family tree. It’s a story of love, of loss and gain….of ultimate triumph and ultimate demise. The story weaving it’s way throughout Breanna’s and Thomas’ wedding day. In it you have friends who are loyal to a fault, who would do anything for Bre and Tom…kind of like R2-D2 and C-3PO. I would say the Canadian is C3-PO…he was kind of mouthy :). You have the love story of Bre and Tom kind of like that of Leia and Han….one steeped in trials but also one steeped deep in love and the absolute willingness to be eachothers support. The story of loss of those who could not be there in physical presence but who’s spirits were definitely felt. Let’s not forget the Jedi Masters….who would be Uncle Chris, Rico and Bob guiding the couple into their current way of being. I know though…you’re probably wondering who was Chewie…..and there’s only one answer to that. Kevin. Let’s not forget the girls….I would go out on a limb to say that they combined were the amalgamation of Asoka Tano. If you don’t know who that is….well, then….you got some learning to do. In a galaxy far, far away also known as Vancouver, Breanna and Thomas had one of the most fun and cool weddings I’ve been apart of. Congrats to Breanna and Thomas. I call dibs on being Yoda.

The wonderful people that helped make this day perfect: