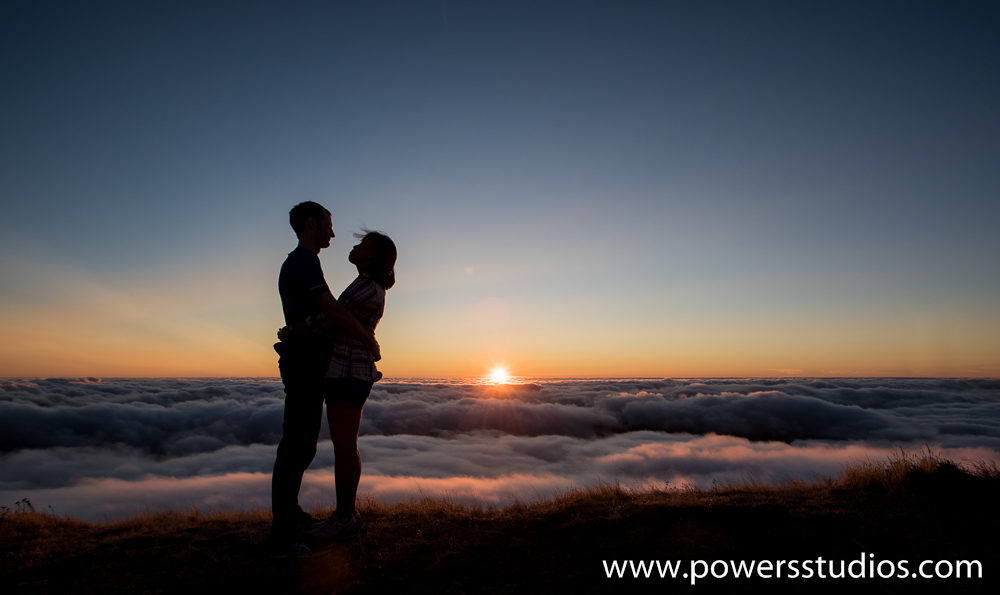 Simply amazing! When I talked with Ehrine and Alan about where they wanted to do their engagement photos, they weren’t sure, but just knew they wanted something different and outdoors. I decided to suggest something that I had wanted to do for quite sometime, an engagement shoot hike up to the top of a beautiful viewpoint. When I described Saddle Mountain in the Coast Range, they seemed super interested, and a few weeks later after testing it out themselves, they were sold! When the day finally came, I couldn’t wait. We embarked on the 2.5 mile hike up more than 1,600 ft. in elevation gain, stopping along the way at what seemed like endless photo opportunities. The main goal however, was to make it to the top in time for sunset and then stay for the stars to come out. Everything was lining up perfectly! We arrived at the summit just as the sun was bursting into beautiful colors over a cloud covered Pacific Ocean. After capturing the last bit of light we hunkered down from the wind, enjoyed some hot tea and coffee, and then waited for the dark to come. As we waited, the low clouds were starting to rise, and I was worried that we would loose our opportunity for a star photo. I decided that we had to go ahead and go for it, and getting the camera ready, but at the moment we became totally enveloped in a glowing white cloud. Not to be deterred, I continued to get set up and put Ehrine and Alan into position and just waited. Patience paid off and I was able to get one frame off just as we had a moment of clearing before the beautiful peak became totally socked in for the evening. Ehrine and Alan, I absolutely can not wait for your wedding next year on the coast. Perhaps some cliff diving or para gliding!