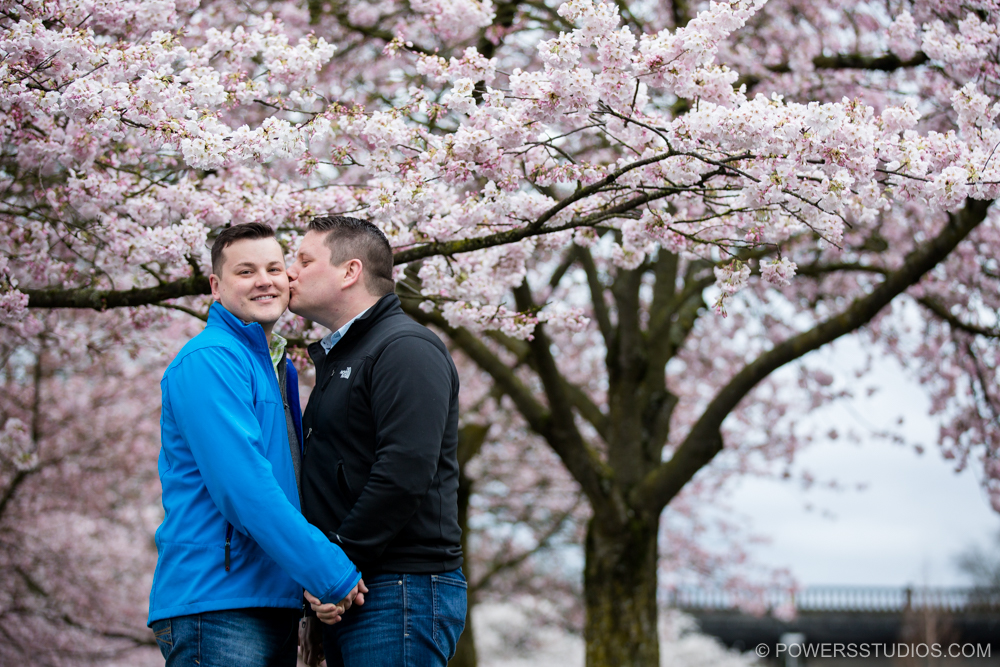 I love a couple that are up for an adventure… and what an adventure we had. Jason & Drew decided that they would like to move forward with our session despite the threat of rain. We started our session at the Tom McCall Waterfront Park to capture the cherry blossoms that has JUST made their appearance. The rain held and the dreary day meant that the usually busy park was relatively quiet. They wanted their dogs in the photos, but they were brilliant and brought Jason’s parents to help wrangle the dogs. The extra set of hands made such a huge difference, and I love that their “fur babies” got in some shots as well! Then Mom and Dad took the puppies home and we ventured up to the Burnside Bridge to shoot in front of the White Stag Portland Sign. And then it happened… the rain. As we were heading up to the bridge it started POURING! You can imagine us with umbrellas and camera gear and me carrying a big softbox running across the bridge to get a better vantage in the bucketing rain. I love that these guys just laughed and enjoyed the adventure! We finished our session at the Eastbank Esplanade and the rain stopped long enough to get some images of the Portland skyline. Thanks Jason and Drew for the fun evening! I just know that your wedding is going to be so much fun, because you guys are a blast!