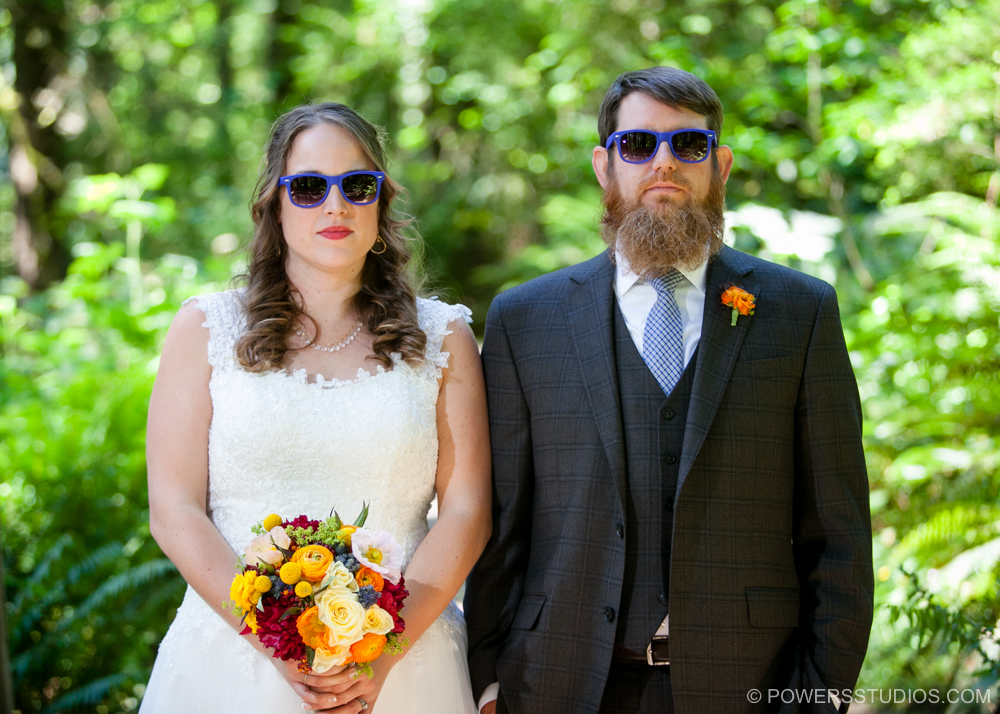 There is power in the beard. What kind of power? Some say it’s the ability to render people happy when they are sad. Some say, it’s hypnotic in the way it moves to and fro similar to the dance of a King Cobra. Others claim that at the end of the rainbow is a beard and then and only then, will you find a pot of gold within the beard. Are these all myths? Or, are all these urban legends true? Ehhhhh, I’m not sure but I do know that Bryan has an awesome beard and Violet loves Bryan so all these tales seem legit to me. I do know that the tale of Violet and Bryan’s rocking good time wedding is not a story but a biography filled with awesome music, chocolate bears bursting with other bears of equal goodness and Pittsburgh. Let’s set the stage like they do in documentaries. Panning from left to right, you see a vision of Opal 28, a wedding venue in SE Portland. You hear raucous laughter from an upstairs apartment. My voice comes out of nowhere…stating that this is the beginning of the wedding day, then the picture fades out. Now, if I was in charge I’d have the rock filled montage happen now where you see me taking photos of the couple in the middle of a forest, fast forward to the party bus, fast forward back to Opal 28, a beard closeup, fast forward to laundry mat and done. I’m not in charge though, the suits insist that I break it down properly so here we go. We did indeed start at Opal 28 which has some sweet rooms for the bride and groom to get ready in. Bryan’s room had the baseball game on, Ben was eating cake for breakfast, Joel was just hanging out watching the game with Bryan. Cool as cucumbers in the back of the fridge because you forgot you bought it. Let’s face it, guys getting dressed happens in about 2 minutes. The girls room, that’s where all the action is at. Sometimes you have lashes flying everywhere, material getting cut, some swear words, shoes clicking and clacking back and forth, puffs of foundation powder, hair spray clouds, and the bride. This time though, it wasn’t like that at all. It was all smiles, selfies and photobombs. Violet was just hanging out and so were her friends, just waiting for the magic time to you know……magic. I floated around and observed shenanigans of the best kind. The next stop was Hoyt Arboretum. It was a beautiful day. As the crowd gathered, Violet made her way down to get married akin to a leaf slowly making its way down to the earth to join the other leaves. She finally makes it to Bryan. Joel did the ceremony and he did it proper. Under a beautiful arbor, they staked their claim to each other and the deed, amongst laughter and happy tears was done. What came first the Party or the Bus? Does it matter, no…what matters is that it happens and in this case it happened on the way to their reception. Once we got there, there was a buzz. People were showing up, food was being prepared. They had these pretzel chocolate nut things that were awesome….I had approximately 136 of them. There were a couple of things, once the night’s events started that were awesomely different. 1. Bryan and Violet told their guests to make them a playlist by giving one song and Bryan and Violet would make a top 20 from it……freaking genius. 2 Instead of feeding each other cake or pie or cupcakes they did a bear smash. Smashing a chocolate bear with little gummy bears inside them. So. Fun. 3. Pittsburgh. 4. We took some pictures in a laundrymat because why wouldn’t you do that? If this wedding was a dude, I’d give him a bro hug and a fist bump and yes, we’d definitely blow it up.